Born in 1908 in Lehi, Utah, he graduated from Brigham Young University with a bachelor’s degree in 1932. Hasler spoke fluent German, and in 1945, served as a research analyst with the U.S. Air Force Strategic Bombing Survey in post-World War II Germany. He appreciated the opportunity to visit laboratories and meet with natural scientists that had survived the war. Hasler played the key role in the construction of the Laboratory of Limnology on Lake Mendota, and the Trout Lake Station on Trout Lake.

Hasler was one of 13 students who received doctorates under Chancey Juday in 1932.  In 1937 he returned to the University, completed his PhD and was hired as an instructor in the Zoology Department and promoted to assistant professor in 1941.  After serving with the U.S. Strategic Bombing Survey in Germany in 1945, he returned to the university in 1945 as associate professor of Zoology and was promoted to full professor in 1948, and served in that capacity until he retired in 1978.  The Wisconsin School of Limnology was continued, strengthened, and enlarged by Hasler from 1946-1978.

“Lake Mendota is our Laboratory”

“Many people who work on ecological problems today remain awed by the insightfulness of Hasler’s research,” says John Magnuson. “He was a big thinker and had grand ideas. He believed you were not done in research until you dealt with its applications in society.”

His most famous research began in the late 1940s, when he demonstrated that “olfactory imprinting,” enabled salmon to journey thousands of miles to spawn in the stream of their birth. The idea occurred to Hasler when he visited a mountain stream near his hometown in Utah, and was struck by how the smells of native plants seemed to rekindle childhood memories.

Hasler, pioneered a new way to study ecological problems using experimental manipulations of entire lake ecosystems. He recognized that lakes were too complex to be studied piecemeal in a laboratory setting. His most famous “whole lake experiment” was at Peter and Paul Lake in the 1950s. Subsequently, his students founded research centers with this model in the U.S. and Canada. Whole-ecosystem experiments are used widely in lakes, streams, forests and oceans. 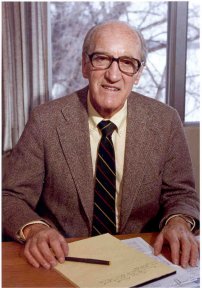 Hasler helped define the importance of land-water interactions as a primary variable in the water quality and ecology of lakes. His work on “cultural eutrophication” helped inform efforts to divert sewage and control fertilizer runoff and soil erosion in lakes, including Lake Mendota. Hasler served as an advisor to 52 doctoral students and authored more than 200 publications and seven books. He was a past president of the American Society for Limnology and Oceanography, the American Society of Zoologists and the Ecological Society of America. He was a founder and first director of the Institute for Ecology. He was a 1969 inductee to the National Academy of Sciences and a 1972 inductee to the American Academy of Arts and Sciences, and holds many lifetime service and achievement awards, both national and international. He was professor emeritus after retiring in 1978, having spent 41 years on the faculty at the University of Wisconsin.

Arthur Hasler died on Friday, March 23, 2001, at the age of 93. He was survived by his wife, Hatheway, and his children, Sylvia (Thatcher), A. Frederick, Bruce, Mark, Galen and Karl.