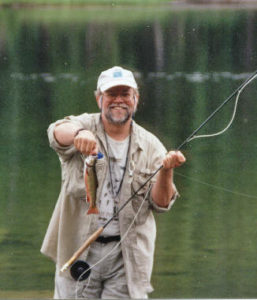 Steve Carpenter, director of the CFL and Stephen Alfred Forbes professor of Integrative Biology (Zoology), retired after 28 years at the University of Wisconsin-Madison.

Widely recognized as one of the world’s most influential researchers in the fields of limnology and ecosystem science, Carpenter leaves a legacy that will endure not just here at the CFL, but throughout the ecological sciences and in lakes, rivers and streams across Wisconsin and the globe.

“If you went to any freshwater research institute in the world,” says Jake Vander Zanden, new director of the CFL, “and asked the researchers there who the leading scientist was in their field, they would all say ‘Steve Carpenter.’ Steve helped change not only the way we study freshwater systems, but also how we manage them and work to conserve them.”

Carpenter spent his career combining theoretical modeling, long-term studies, and whole-ecosystem experiments to inform our understanding and management of freshwater resources. His work showed that phosphorus from agricultural activity is the leading contributor to poor water quality in lakes. He helped build scientists’ ability to forecast potentially harmful algal blooms and pioneered work on how disturbances in ecosystems can cascade up or down the food web, leading to dramatic change.

Monica Turner, Eugene P. Odum professor of ecology at UW-Madison, says Carpenter’s skill as a scientist was matched by a willingness and ability to collaborate. With his “active support, praise and commitment to his colleagues,” she says, he helped establish the UW-Madison as a leader in the ecological sciences and “helped all boats to rise, not just his own.”

Michael L. Pace, a professor in the Department of Environmental Sciences at the University of Virginia, agrees. “It is hard to think of another scientist who makes those working with him so much better,” he says.

Pace calls Carpenter a “brilliant and creative” scientist and compares him to legendary musician Ray Charles who could sing a song perfectly on the first take and became known in the business as “One-Take Ray.”

“Steve is the ‘One-Take Ray’ of scientific paper writing,” says Pace. “He somehow visualizes a paper and knows before hitting the keyboard how he wants to play the song. I’ve never seen anyone who was better or more efficient.”

Among many other awards and accomplishments, Carpenter is the former President of the Ecological Society of America, co-founder of the scientific journal Ecosystems, a member of the National Academy of Sciences and recipient of the 2011 Stockholm Water Prize, widely regarded as the “Nobel Prize” of freshwater sciences.

While he is stepping away from the administrative and teaching duties of his previous titles, Carpenter will still continue to conduct research as an emeritus professor or, as he calls it, “free-range scientist.” When he isn’t cooped up in his office writing papers on big ecological themes, he’ll more than likely be fighting invasive species and restoring native prairie plants on his land in Wisconsin’s driftless area west of Madison.