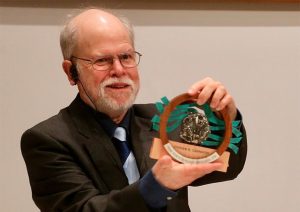 On a Wednesday morning just before last Christmas, Steve Carpenter,
professor and director emeritus of the Center for Limnology, stood onstage
in Barcelona to receive (yet another) major award.

The Ramon Margalef Prize in Ecology is given each year by the Government
of Catalonia, an autonomous community in the northeastern corner of Spain,
in memory of ecologist, Ramon Margalef, who was one of that country’s
most notable scientists until his death in 2004.

Carpenter, the first limnologist to receive the prize, was recognized for his
“creative and original work, which has transformed our understanding of
ecosystems” and “of lakes and the rational use of water resources.”

Carpenter says the role Ramon Margalef played in shaping his own thinking makes the award particularly special. As an
undergraduate student just starting out in ecology, Carpenter recalls being assigned to read some of Margalef’s scientific
papers. “I was intrigued,” he recalls, “these were some of the first concepts about ecosystems as a whole, integrated
complex system. Thinking this way led to my own focus on the experimental study of whole ecosystems.”

In his acceptance speech, Carpenter credited the large team of collaborators that make
careers like his possible. “Although I am standing here alone to accept a great award, all
accomplishments in science depend on teamwork and luck,” he said. “Long term observation
of whole ecosystems extends beyond the scope of any one career. It requires an organization of
thoughtful committed people, working together as a team, in institutions that are designed to be
broader, more long-lasting, and more integrative than any individual person can be in a lifetime.”