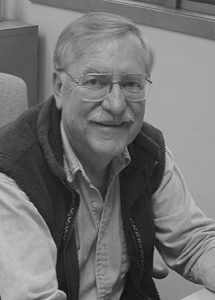 In early 2021, Carl J. Bowser passed away at home in Arizona after a long bout with cancer. I miss him, as do all who knew him.

Carl, a geologist, geochemist, and hydrologist, was one of six faculty members who wrote our first proposal to the National Science Foundation in 1980 that resulted in the North Temperate Lakes Long-Term Ecological Research (NTL-LTER) program, which has now been studying Wisconsin lakes for nearly 40 years. Judy, Carl’s wife, writes that the LTER project was indeed one of the involvements “for which he was most proud.”

Together, he and I selected the first set of primary study lakes, and ran the NTL program together with a lot of help from our colleagues. Carl continued to be a key contributor through the early 2000’s and provided intellectual leadership and skill in orchestrating our research efforts. Carl was also a long-time participant in the “Sapelo” class, which was a rite of passage for many young limnology students.

Over the years, we became friends, canoed the lower Wisconsin River, and spent hours driving back and forth to Trout Lake Station. I always enjoyed his company and his stories about the geological landscape between Madison and Trout Lake.

Carl’s mark remains on the NTL-LTER program and on those of us who knew him. We very much appreciate his contributions.