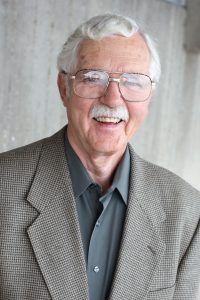 Professor Emeritus James F. Kitchell passed away after a long illness on July 28, 2020 at the age of 78.

Jim pioneered the development of bioenergetics models for fishes and applied these models to diverse problems of fish management and food web change in the Great Lakes and inland lakes. He was a core contributor to the trophic cascade concept and a long series of whole-lake experiments to study cascades in small experimental lakes, Lake Mendota, the Great Lakes, and oceans. He received many honors for research, including a named professorship, the Arthur D. Hasler Professor of Zoology, and awards from the American Fisheries Society, American Society of Limnology and Oceanography, and Great Lakes Fisheries Commission.

In 1970 Jim joined the Limnology Lab as a Project Associate working on Lake Wingra. He was appointed to the faculty of Zoology at UW-Madison as Assistant Professor in 1974 and transitioned through the academic instars to Professor in 1982. Jim served as Associate Director of the CFL from 1985-2000 and Director from 2000-2009. Jim trained dozens of graduate students and postdocs. Throughout his career Jim co-taught Ecology of Fishes, first with John Magnuson and then with Jake Vander Zanden. For many years he organized Problems in Oceanography, the core course of UW’s Oceanography and Limnology program (now Limnology and Marine Science). Jim was an outstanding lecturer and storyteller in scientific meetings and the classroom. He played a vital role in building the CFL, and we are saddened by his passing.