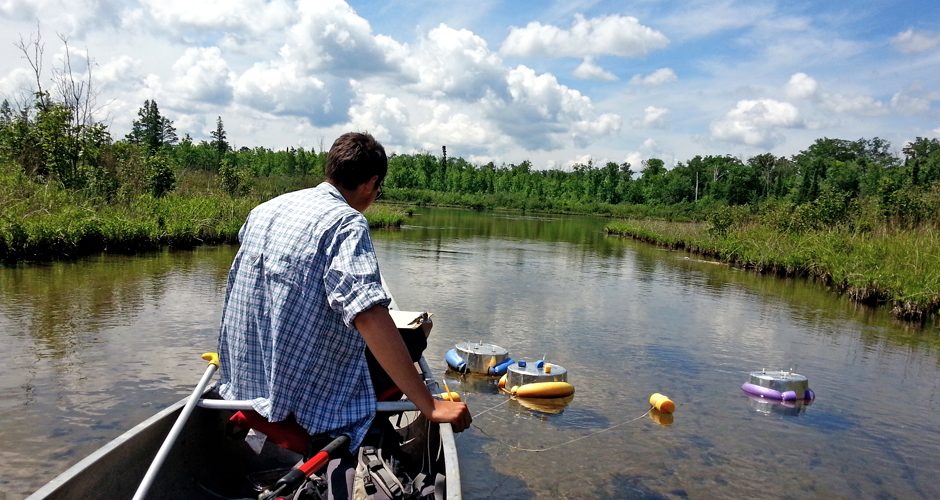 While researchers all over the globe have been studying greenhouse gases, there are still some areas in the field that have not received as much attention as they deserve. Emily Stanley, a professor at the Center for Limnology and principal investigator for the North Temperate Lakes Long Term Ecological Research (NTL-LTER) program, has spent a significant part of her career exploring a few of them.

“Clearly we have a problem with greenhouse gases. What people may not realize is that streams and lakes are hotspots of global methane and carbon dioxide. Understanding greenhouse gas dynamics in these systems is important because they are vents all over the world and they are not insignificant,” said Stanley.

The NTL-LTER program is one of 28 around the U.S. and beyond that form a rigorous research network of the world’s ecosystems through funding from the National Science Foundation. While research projects are often undertaken in terms of two or three years, five if they are lucky, the NTL-LTR program has been collecting data since 1981 on eleven core lakes – four in southern Wisconsin and seven in northern Vilas County.

“We hope to be going another 40 years,” Stanley said. “We collect biological, chemical, and physical data. This data is influenced by human responses and actions as well…we can’t separate humans from the environment.”

Two significant effects humans have on streams and lakes are “turning them green” by creating conditions that encourage algal blooms and building dams. Both increase emissions of not just carbon dioxide, but also methane, the more ephemeral gas that often bubbles up to the surface of a lake.

“The bubbling, or ebullition, is hard to measure, but it is important because lots of methane leaves lakes that way,” said Stanley. “We will need about 10 to 20 years of that data to get some picture of the real processes and their impact. We are building a global database on these types of processes in streams. The conventional view has been that there’s not much methane in lakes and streams, but we already know with the data we have that that is not true.”

In its forty year history, NTL-LTER has made some other interesting – sometimes surprising – observations.

“People have said of us, ‘You were in the right place at the right time,” Stanley says. “I think we are in the right place all the time.” She mentioned, as an example, their strategy of placing data gathering devices under ice, which led to their observation that lakes starts stratifying before ice appears in winter which, Stanley elaborates, is “not what the textbooks said.”

Ultimately, the NTL-LTER has two main goals for its greenhouse gas dynamics research. It aims to build a dataset for use as a resource for the scientific community and generate a reliable global estimate of methane emissions from world streams and rivers. And it also hopes that studying aquatic gas dynamics will be a means of understanding overall processes of lakes and streams. “We want to use methane as a lens for viewing these ecosystems,” Stanley says.

Stanley plans on not only continuing methane research and gaining more knowledge of how greenhouse gas processes function in lakes and streams, but also of continuing to add to the decades-long dataset that the NTL-LTER program has built.

“The incredible importance of having long term research can’t be overstated,” she says. “Understanding can only be gained over a long time scale. Too often, people think in terms of only one to three years. Being able to be in the right place all the time, as we have with NTL-LTER, makes it possible to actually get a grasp of real changes.”