On April 20th of this year, the Secchi disk, that black and white plate at the bottom of many a limnologist’s rope,  turned 150 years old. In 1865, Pietro Angelo Secchi, an Italian Jesuit priest, deployed his new invention in the waters of the Mediterranean, dropping the disk in over the side of the papal yacht. But, before Secchi made his indelible mark on our field of study, he made waves in another field.

Secchi was a prolific scientist, publishing more than 700 papers in his lifetime (1818-1878).  But the bulk of those papers were in his true discipline – astrophysics. Secchi is credited with developing the first spectral classification system for stars. He also discovered a comet (named after him), drew one of the earliest maps of Mars and served as a professor of astronomy at the Roman College in the Vatican.

Luckily for limnology (if not for Secchi), the Jesuits were expelled from Rome in 1848, an exile that eventually led Secchi to Georgetown University in Washington D.C. There he befriended Commander Matthew Fontaine Maury, who would become superintendent of the United States Naval Observatory. This friendship led Secchi to devote at least a little bit of his attention to aquatic, rather than astronomic, matters. This served him well when, as one of the scientific advisers to the Pope, Secchi was asked to quantify water clarity in the Mediterranean Sea. The rest, as they say, is history.

While water clarity measurements undoubtedly pre-dated Secchi by many, many years, he was the first to standardize the procedure and, crucial to anyone’s scientific legacy, publish his results. Hence, we now use a disk named after him to this day. 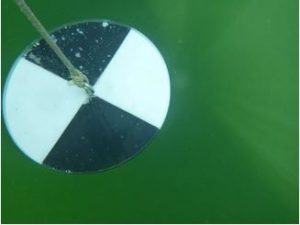 Of course, new technology exists that can provide more accurate water clarity readings but, since people have been using Secchi disks for 150 years, continuing the practice allows us to track water clarity trends over long periods of time with a standardized measurement. Plus, since anyone can use a Secchi disk, Pietro Angelo’s namesake device is now in the hands of citizen scientists across the globe, allowing scientists to ask big picture questions across immense amounts of space and time.

In fact, just this spring, CFL graduate student, Jake Walsh started a “Monitor Mendota” campaign. It looked like spiny water flea predation on Daphnia was going to keep the lake’s annual clear water phase from even happening for the second year in a row. But, right as we thought the window had closed, the waters cleared.

Walsh quickly put out a call for folks all around Lake Mendota to send measurements of water clarity to the CFL. Soon pictures and Secchi depths were trickling in to our inbox, proving that Secchi’s legacy is alive and well.

Here’s to 150 more years of one of our favorite limnological tools – and a big thank you to the Jesuit priest who started it all.